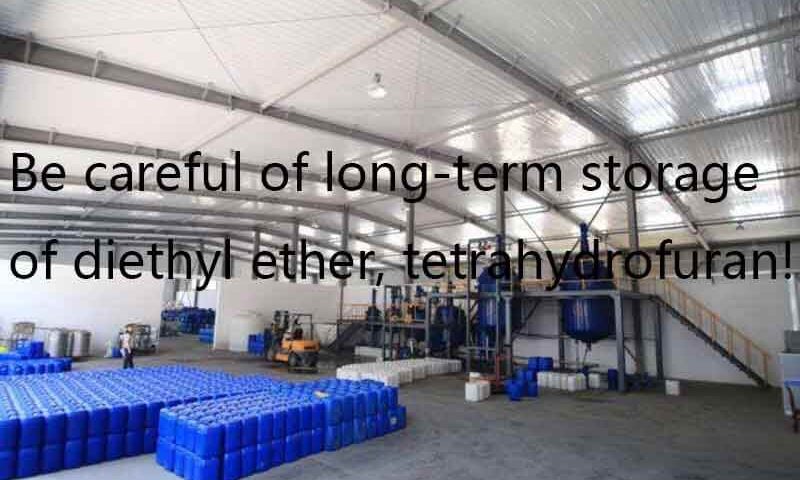 In 2006, there was a lab explosion at UC Berkeley. A college student who was using a rotary evaporator to remove organic solvents from azobenzene exploded, sending shards of glass flying into her face and upper body. She was wearing goggles, but the glass scratched her above her eye and she got stitches. She had just adjusted the flask at the bottom when it exploded, she recalls.

The investigation found that the explosion was most likely caused by peroxide pollutants in the solvent. Both tetrahydrofuran (THF) and diethyl ether were used in the reaction, and both solvents formed peroxides over time. The sample in THF bottle was then analyzed using a simple test and found to contain excessive peroxide (over 100 mg/L). Rotary evaporator evaporation concentrates the peroxide in the bottom of the glass reaction vessel, and any movement of the vessel may cause the peroxide crystals, now dry and sensitive to vibration, to explode.

The danger of peroxides

Tetrahydrofuran and diethyl ether are easy to produce peroxides in long-term storage. Peroxides have strong oxidation properties and belong to inflammable and explosive compounds. Peroxides all contain peroxy groups (-O-O-). Due to the weak binding force of peroxy bonds, the energy required for breaking is not large. Peroxy groups are extremely unstable structures and sensitive to heat, vibration, impact or friction, which decompose when slightly affected by external forces. If the heat release rate of the reaction exceeds the heat loss rate of the surrounding environment, the temperature rises under the action of decomposition heat, and the reaction speeds up and develops to explosion.

The order of change in the stability of organic peroxides was as follows: the peroxides of ketones < diacetyl peroxides < perethers < dialkyl peroxides. The lower homologues of various peroxides are more sensitive to mechanical action than the higher homologues and have a greater explosion risk. Peroxides react with organic substances to form explosive mixtures under certain conditions. Under the action of valence metal salts and amines, the concentrated peroxide will decompose rapidly when mixed with strong acid, causing explosion. Hydrogen peroxide and formaldehyde have caused explosions in the past. Acetone peroxide derivatives accumulated in the residue of the distillation unit and exploded in the presence of acid. There have been numerous explosions and fires when acetone peroxide derivatives containing polyester resin are mixed with a solution of cobalt naphthenate. Solid inorganic peroxides may also cause oxidation and fire when they contact with organic matters, such as barium peroxide and gunny bags, which may cause spontaneous combustion accidents.

Detection and removal of peroxides from Tetrahydrofuran

Method 1. 10%KI (potassium iodide) aqueous solution was prepared, a small amount of starch was added, and 10 ml tetrahydrofuran was added, oscillated, placed for about 3~5 minutes, and turned yellow, indicating the presence of peroxide, the darker the peroxide, the more peroxide, otherwise, it can be safely used.

Method 2. The discoloration of starch – potassium iodide paper was determined.

Method 3. Add 1mL 10% potassium iodide solution to 5mL tetrahydrofuran and shake it for 1min. If peroxide is present, free iodine will be released. The water layer is yellow brown or 4 drops of 0.5% starch solution are added.

Removal of peroxides from tetrahydrofuran

3. THF was passed through activated alumina to remove peroxide.

4. Neutralize and reduce with an appropriate amount of 10% sodium sulfite.

5. Once the barrels of tetrahydrofuran are opened, the storage period will be shortened, even if nitrogen is re-filled for protection. Therefore, THF left in the bucket should be used as soon as possible.

6. Adding antioxidants such as 2,6, 12 tert-butyl para-cresol to tetrahydrofuran can effectively inhibit the formation of peroxides. The mechanism of action is that such antioxidants can combine with active groups to produce more stable compounds, thus ending the chain reaction.

7. The decomposition of peroxides will be accelerated by handling them in a rough-surfaced container. For example, 38% hydrogen peroxide will not decompose when heated to 60℃ in a polished platinum dish, while it will decompose at room temperature in a platinum dish with several scratches on the inner surface.
So those are some of the ways to get rid of peroxides.