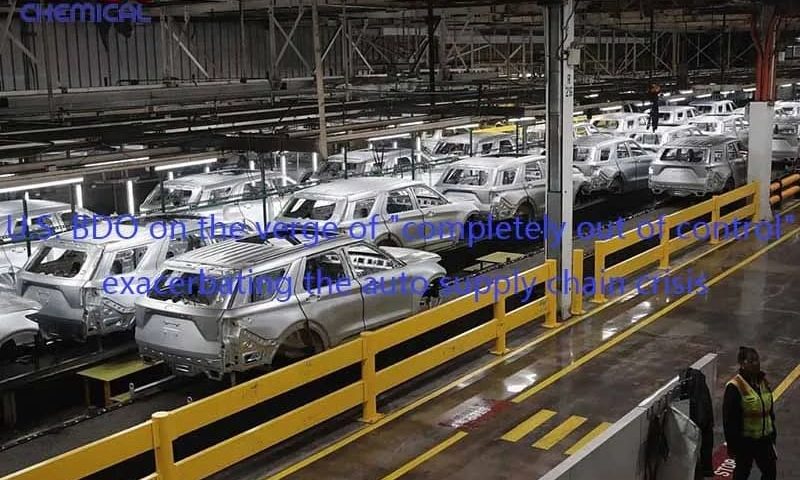 The acute shortage of butanediol (BDO) and its derivatives in the USA has been a major factor limiting production in major automotive industries. But now the US has to face a new challenge.

The latest automotive quality report from automotive industry consultant J.D. Power shows that the quality of new vehicles in the US in 2022 has fallen to a 36-year low, and the main reasons behind this are ongoing supply chain problems and labour shortages.

US vehicle sales fell in the second quarter as chip shortages continued to weigh on vehicle supply, while rising sticker prices discouraged consumers. The chip shortage has mainly affected most automakers, including General Motors, but Asian brands such as Honda and Nissan have been the most affected.

Since the outbreak of the new crown epidemic, carmakers have struggled to cope with supply chain disruptions and shortages of factory workers. Major car companies have also responded.

General Motors said its plant in Michigan, which makes Chevrolet and Buick SUVs, had cancelled some production shifts on February 9 and 10 due to a shortage of parts and was working with suppliers to alleviate the situation.

Toyota has also halted production work at three of its plants in Canada and one in Kentucky, USA, and said this production disruption will continue through the end of the week. Toyota’s plant in Kentucky is its largest in the world and produces models including the RAV4 Wing and Camry sedan.

Some economists believe that policies such as quarantine and vaccinations could lead to a more pronounced labour shortage in the US and that there is a risk that supply chain problems could worsen.

In the automotive sector, the global chip shortage is expected to continue, and it is uncertain when and to what extent it will be alleviated.

In a newly released report, market research firm IHSMarkit said that, according to a 30-year survey of purchasing managers, the situation is slightly better going into 2022, but companies reporting output constrained by shortages are still 3.5 times the long-term average. In addition, the extended average lead times for suppliers have eased, but are still well above the levels seen before the epidemic.

These shortages have created a sellers’ market. December 2021 saw some welcome cooling of industrial price pressures as supply bottlenecks eased, but manufacturing input costs are still rising faster than they did in the decade prior to the outbreak.

Matteo Fini, vice president of automotive supply chain and technology research at IHSMarkit, said these recent shortages in the supply chain have forced automakers to go against the proven model they have built up over the past 30 years in supply chain management, namely “betraying” the famous Toyota “Code of Conduct’.

The Toyota ‘Code of Conduct’ refers to the premise of lean supply, where the less inventory the better. He explained that the automaker is now considering “stocking up” on certain parts because the cost of expanding inventory is almost nothing compared to the cost of production line downtime.

Two years after the outbreak, the crisis in the automotive industry has not been resolved but may have been exacerbated by new factors that have been added in recent months, according to a recent report on the website of Spanish newspaper La Prensa.

We are still at the peak of the lack of cores,” said Oliver Zipser, CEO of BMW. I hope it will start to ease by next year, but we will still face a fundamental shortage in 2023.” Volkswagen Group’s chief financial officer was more pessimistic, saying it would take until 2024 to fully resume normal production.

The auto industry is facing gloom and doom, with investors pulling out. Shares in car companies have fallen along with the market, and more sharply, due to the volatility caused by the Russian-Ukrainian conflict. The Eurostox Automotive and Accessories Index is down almost 16% this year, while the Eurostox 600 is only slightly above 5%. Shares in Renault, which has a large presence in Russia, have sunk by more than 30% since January this year, and shares in Ford and General Motors in the US have also plunged.

Throughout 2021, a boom in electric vehicles has driven up the carmaker’s share price. However, this trend has been interrupted in 2022. The automotive industry has taken on another soaring cost – the price of lithium. eInvestor trading platform analyst Ben Laidler explains that in the last year, “demand for electric vehicle batteries has outstripped supply from major producers in Australia and Chile” and that the price of lithium surged 450%. Electric car batteries account for 70 per cent of lithium demand, and the average price of batteries is now around US$9,000, 20 per cent over the cost of a car.

Nickel is in a similar situation to lithium and is required for the production of electric cars, with prices increasing by a factor of one in the last year. Aluminium, which is needed to produce any car, is also 40% higher than it was a year ago. In addition, the cost of keeping factories and logistics running is now higher due to energy inflation.

Reports suggest that the rising costs cannot be compensated for by higher sales. In addition to supply chain problems leading to lower production, the consumer side is threatened by the risk of an economic slowdown and higher prices for fuel in particular. The result is that demand in China, the largest car market, fell by almost 12 per cent in March, while sales in Russia plummeted by 63 per cent, according to data from the European Business Association. To counter this situation, price increases are imperative.